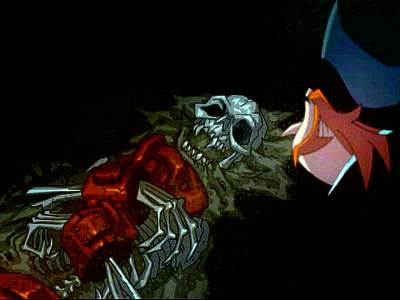 Two of the most iconic figures in history come together to do battle in The Batman vs. Dracula. It’s animated, unrated and there’s blood! I could just end it here but I won’t. The folks in Transylvania have seen to it that the tomb of Dracula was sent as far away from their home as possible. They seemed to have done an excellent job too, as it has ended up in the Gotham City Cemetery.

The Joker and Penguin both serving time in Arkham Asylum are approached by a man (possibly with the name of Bill Carson) with the location of a hidden fortune somewhere in the Gotham Cemetery. This must be all the reason any criminal needs to escape the already easily escapable Arkham Asylum. So Angel Eyes and Tuco, I mean Penguin and Joker are off to the Cemetery to locate the untold riches. As I bet you already figured, Blondie – no, Batman – ruins the party. It’s the plot of The Good, the Bad, and the Ugly. Even if Sergio Leone was alive, he couldn’t complain he did far worse stealing the entire story of Fistful of Dollars from Akira Kurosawa’s Yojimbo.

In all of this excitement Dracula’s tomb is uncovered and he is miraculously brought back to life. His plans are to turn Gotham into the City of the Undead. “Listen to them. Children of the night. What music they make.” Batman soon comes across three of Dracula’s children of the night. With all his bams and pows having no effect, Batsy quickly realizes something is amiss. Wisely the Cape Crusader bails the scene leaving the undead to feast on the innocents on the Gotham Streets. Now that’s a new one for Batman’s conscience to deal with.

Meanwhile back at Wayne Manor. (How about you read that last sentence again, only do it right. Trust me, it’s more satisfying that way.) Bruce Wayne comes across a new face in Gotham City while hosting another one of his fancy parties, a cultural anthropologist Dr. Alucard. The Doctor visiting from Europe is there to study The Bat Man. It doesn’t take long for The World’s Smartest Detective to borrow a lady’s lipstick to write Alucard on a silver platter to view in a mirror revealing his true identity. DRACULA!

Batman soon becomes the blame of all the recent troubles in Gotham City with help from the media. Well written. We are treated to the first of two confrontations between the Dark Knight and the Prince of Darkness. I’ve seen Freddy vs. Jason, Leonardo vs. Raphael and now I have seen Batman vs. Dracula. While Penguin makes sexual innuendos towards Vicki Vale “Nice Jugulars” and Joker becomes a vampire himself, we get to see what we’ve been waiting for the whole time. Batman does his best but as Dracula points out “Try as you may you can not out bat me.” This right after Batman experiences his most embarrassing moment ever. A Dracula palm to the face which slams him into the concrete smashing it to pieces. Batman is able to hold him off til daybreak though. Departing into the darkness of an alley Dracula warns Batman “Next time we do not part until maggots feed upon your flesh.”

The Dark Knight vs The Prince of Darkness, they should reboot both franchises with this premise. Imagine Michael Keaton taking on Gary Oldman, only to have Heath Ledger show up followed by Burgess Meredith. A boy can dream can’t he. The Batman vs. Dracula satisfies the child in me. Oh what it would have been like to have watched this as a youngster. If I had only known of Andy Warhol‘s Batman Dracula (1964) or Leody M. Diaz‘s Batman Fights Dracula (1967), which I would have of course immediately downloaded illegally had it even been possible in the eighties. Instead, I only had Adam West running around with a bomb like an idiot and some shark repellent. Luckily Frank Miller and Tim Burton came to the rescue or I don’t know if this movie would have ever been made.

The Batman vs. Dracula offers us a horror tale that pushes the boundaries like most animated Batman films so often do satisfying The Dark Knerd within all of us.

Best Death: Dracula converting the Joker into a vampire. I know he’s “Not dead, Undead.” Which would make the Penguin utter “I think I need to unwet my pants.” Ha ha. Joker in search of the untold riches stumbles across the Dark Prince this time instead of the pesky Batsy. Only Dracula isn’t compassionate like the human Bruce Wayne, who earlier tried saving the Joker’s life, instead sinking his teeth into the already clown white skin.

Best Scene: Dracula fighting Batman is why we are watching. Every suspenseful encounter building to the next until the explosive final battle. Though, I found the blood bank scene between Batman and a vampire Joker to be my visual favorite. Reminding me of the Department of Mysteries scene in Harry Potter and the Order of the Phoenix where Sirius Black falls to his demise.