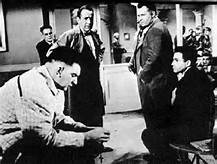 When bigger doesn’t mean better, sometimes you have to hire a man to formulate the right appearance. A sports columnist is hired to build a facade for a behemoth fighter, but soon finds himself tangled up in more than just a PR campaign.

This week marks the 67th anniversary of the release of Mark Robson’s adaptation of the novel by Budd Schulberg. Starring Humphrey Bogart as a semi-retired sports columnist, the film revolves around the budding career of a South American fighter. Bogart plays Eddie Willis, the man tasked with the job of making Toro Moreno (Mike Lane) look like the prize fighter his handlers hope him to be. The only trouble is, it doesn’t seem to be turning out that way – Toro is no fighter, and even a golden PR guy can only do so much to remedy that problem. Even though he knows it is likely a losing battle, Eddie is convinced when he is given a hefty salary and an unlimited expense account.

“Powderpuff punch and a glass jaw – that’s a great combination!”

This is an older version of Bogie, and at first watch you may think perhaps he has lost a little of his old panache. Don’t despair just yet – the movie begins slowly but soon enough Eddie Willis is angry and incensed, and Bogie shows you that he has all his old tricks still neatly up his sleeve. As the exploitation of Moreno continues to get more degrading and less profitable for Moreno himself, Eddie begins to feel guilty about his hand in the process, and he truly begins to care about Toro to boot. He begins to rally for the fighter, upsetting those he works for in the process. However, although I have said that Bogie was not a gentleman, he was a real man, and he continues to portray that type of character here – a rough-around-the-edges good guy hiding behind a tough veneer. He sticks up for the little guy – this time in the body of a very big guy – and is the endearing savior of underdogs everywhere as he does. Plus, that craggy, expressive face is still just as magic as ever.

Eddie’s wife, Beth, (played by Jan Sterling) becomes very upset when she realizes what is being done with Toro’s reputation and career. She comes out to the west coast to travel with Eddie on his journey back east. A scandal pops up with Toro and a dead fighter, which he has nothing and everything to do with, and it begins to weigh heavily on his conscience. Beth soon decides to go home and, in fact, leave home, if Eddie doesn’t stop exploiting Toro and help him find his way to where he belongs, regardless of how much money it takes out of the Willis’ pocket, collectively.

At one point in the film, Eddie tells her he will wire her $500 and he wants her to spend all of it.  She does as he says. Later, when they are fighting about staying or going home, he uses this against her. She retorts, “You’re beginning to sound as if money means everything to you!” This is a lovely change from the normal money-hungry, lust-driven femmes that populate the lower echelons of film noir females. Sterling is down-to-earth, plain to look at, but charming, classy, and powerful all at the same time. I definitely recommend that she not be discredited as “just another damsel” when you watch this film. She truly contributes to her marriage in thought and action, and to the well-being of Toro secondhand.

“I’m fine. I have everything I want…except you.”

The depth of Eddie Willis’ character is the true tale to be told in this film. Time and again we watch Eddie defend the underdog – not only Toro, but his native manager who came with him from Argentina, as well. His soft heart shows often, and the viewer can’t help but be enamored with his honorable inner self in contrast with his hard exterior. Nick Benko (Rod Steiger) is the boxing promoter employing Eddie and Toro, and he is a sour foil for Willis’ chivalry. He has no room for caring in his heart when it comes to his fighters or his business partners – unless it will reap him dividends. After deporting Toro’s manager, exploiting his opponent’s accidental death, rigging multiple fights to increase Toro’s fame, robbing his fighter of any real profit, and disrespecting everyone he comes in contact with, it is easy to see why Beth Willis left her husband when she saw Eddie was not going to take himself out from under the thumb of Benko.

As the film winds down to its close, the viewer is once again shocked by the dastardly lows that Benko will sink to in order to maintain his own profit. But we are also shown the exceptional highs that Willis will climb to in order to do what he feels is right by Toro. It isn’t for me to spoil that for you, so I suggest you watch for yourself to see the selfless extent of Eddie Willis’ integrity. In the end, Eddie uses his experience for a positive purpose, and his wife couldn’t be more proud. It’s a nice ending for a gritty, harsh movie that shows the sadder side of success and the road to reach it. This movie starring Bogart is one I highly recommend for anyone who enjoys stories of human redemption. 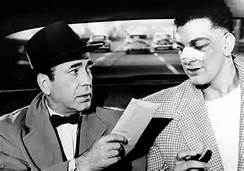