In Vichy France-controlled Martinique, you make a living any way you can. For him, that meant renting out his boat to tourists and refugees. For her, that meant charming her way right into men’s minds and wallets. Lauren Bacall and Humphrey Bogart pair up for the first time in this 1944 production directed by Howard Hawks and adapted for the screen from Hemingway’s novel by William Faulkner and James Furthman.

Humphrey Bogart portrays Captain Harry Morgan, an American who makes his living by renting his boat out to tourists for fishing trips by day, while transporting political refugees during the night. The big dilemma in the film involves Morgan assisting a French Resistance fighter and his wife to safety, which turns out to be a trickier task than anticipated. He meets Marie “Slim” Browning (Lauren Bacall) along the way, and they begin a game of hard-to-get, although Slim assures him that although she’s hard to get “All [he] has to do is ask”. Slim becomes an accomplice in helping the two escape, along with Morgan’s right-hand man Eddie (Walter Brennan), a gimpy, good-hearted, overly-chatty drunk (or what you might call a “borachon”, wink wink – and if you get that reference, well bravo to you). Together the three make a splendid team, and all ends well. But like all good stories, the middle ground is a little shaky, to keep you interested. 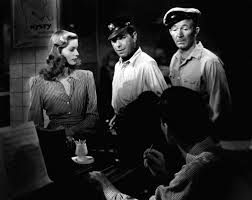 Lauren Bacall makes her film debut in this film noir classic, released in 1945. Bacall is suave and sophisticated on screen, hiding the nerves that plagued her throughout her early career very well. Her true self mirrored that of the character she played – cool, calm, experienced, and street-wise on the outside; young and scared on the inside, looking for someone to see through her act. This is the film where Bacall developed her Look – quite by accident and very much out of necessity. Because of her extreme anxiety while working opposite her leading man, Bacall had problems with her body and head shaking while she was on camera. To combat this, she learned that she could tilt her chin down and look at him from under her lashes, and the tremors would stop. Thus was born the Look, and she became famous for it, using it to her advantage throughout her career.

The chemistry between the characters is excellent. Bacall does not seem to be a film debutante in this movie at all; quite the contrary, in fact, as she seems mature beyond her years when she sings near the end of the movie, and she delivers witty dialogue effortlessly from the very first time she is on screen. She also sings like a chanteuse, backed by none other than Hoagie Carmichael as the pianist Cricket, and she insists that she did not have this dubbed. Much has been said about this, and Hawks dispelled the notion that Bacall did not do her own singing. The same is true for The Big Sleep, in which she sings to a much lesser degree. Her gravelly, sultry crooning makes her seem much older than she is supposed to be – 22, I believe, is the magic number. I for one have no problem believing that Bacall sang her own parts, because it sounds just like her older speaking voice. 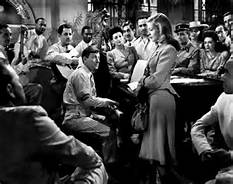 Bogart is an old pro at this game by the making of To Have and Have Not, and it shows. As always his expressive, craggy face is enchanting as it goes through the complete range of emotions. His particular chemistry with Bacall of course developed during the production of this film, and it is evident in their interactions on camera. Especially enjoyable is the flare of jealousy between them during a few moments. For him, it is when he agrees that she should go “hunting’ for a man to target for his wallet, as both of them are broke due to unfortunate events, but then he doesn’t enjoy watching her move in for the proverbial kill. For her, it is watching him interact with the young and fetching Resistance fighter’s wife, and she makes no pretense otherwise. At one point she repeats a line spoken by the other woman, asking Morgan if it works as well the second time, coyly and with fluttering eyelashes. The banter between the two real-life lovers is laden with fireworks, to the great benefit of the audience. It is also simply endearing to witness the sparks flying between the two star-crossed lovers.

“Sometimes I know exactly what you’re going to say. Most of the time. The other times…the other times, you’re just a stinker.”

The film has some other little points of interest that caught my eye. For instance, Joy Barlow can be seen in one of her many supporting roles. She plays one of the background singers in the lounge where Slim sings in this movie. In The Big Sleep, she has her most iconic role as the cab driver with the libido-driven dialogue.

Cab driver: If you ever need a ride…
Marlowe: Day or night?
Cab driver: Night. I work days.

Another interesting point I noticed was that the fish of topic is always a marlin. Why is this interesting, you ask? Elementary, my dear Watson! The marlin is the fish that is sought after and which is the undoing of the protagonist in The Old Man and The Sea, another Hemingway tale that is regarded as one of his most famous works – and is the bane of many a high school student. 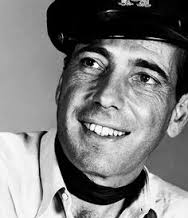 This stands as my favorite Bogart movie to date, being much more enjoyable than Casablanca, and much more positive in the end. Also, much can be said for the fact that Bacall and Bogart are starring together, and that’s about as good as it gets. Tension and humor and romance combine to create a very appealing and engrossing film that not only showcases the extreme talents of its stars, but also captures the beginnings of a love that lives on as legend.

“We had it all, just like Bogie and Bacall.”