Deemed the greatest screenplay ever written, this 1942 classic film noir is hard to dismiss as one of the greatest movies ever made. Be aware that, due to the age of the movie, spoilers are inherent to this review. Honestly, if you have not watched Casablanca, I strongly encourage you to do so before you read this, or any, review of it. The story? World at war, man meets woman and they fall in love, then war tears them apart again. Years later, fate sees fit to bring them back together. It is the pieces in between, all the small details, that make the story the beautiful classic that it is.

Directed by Michael Curtiz and starring some of the era’s best screen names, Casablanca has become a staple of the movie lover’s catalog of favorites. Numerous quotes (and one famous misquote), scenarios, characters, and even a song, along with some ingenious methods of making the movie appear to have much more production value than it actually does, have combined to make a film that continues to inspire and intrigue countless numbers of film fanatics – both new and old.

The cast includes Humphrey Bogart (Rick Blain), Ingrid Bergman (Ilsa Lund), Paul Henreid (Victor Laszlo), Claude Rains (Capt. Louis Renault), Peter Lorre (Ugarte), and Dooley Wilson (Sam). The cast works together like old friends and the dialogue flows like silk between them. So much can be said of the chemistry between Bogart and Bergman, but for some reason unknown to folks like me, the pair never made another movie together. To make it seem that Rick was taller than Ilsa, per so many stereotypical ideals of the day, Bogart wore stacked shoes in most shots. In the ones where the pair are not standing – think the couch scene in their flashback to Paris – Bergman purposely slouches to conceal her height. These are some fine examples of how the director made everything work together to create a masterpiece of cinema, even with the odds against him for various reasons. 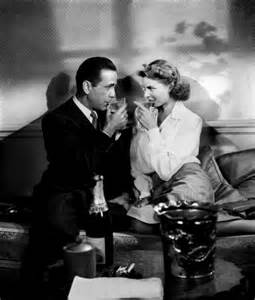 The film was under production during WWII, and because of this there were limited resources with which to build sets and such. In order to combat this problem (pun fully intended), many old sets were recycled and modified to meet the requirements of Casablanca. However, Rick’s Cafe Americain was built for the movie, with some slimming down of what would normally be put into a set (outside of war time). For instance, the shadows are painted on in many spots, because there was not enough set material to make all the correct dimensional pieces that would normally cast shadows. In one scene, the airplane in the background is a cardboard cut-out being serviced by “little people”, as the resources state. Planes were precious and costly, but cardboard and a smaller cast were easy to come by and worked very well. This ploy was used in several other films of the time, as well.

The hot commodity in this story is a set of transit papers, which are essentially free passes out of the occupied area in which Casablanca lies. Rick has access to them, and this is the crux. He is reunited with Ilsa, with whom he had a glorious love affair in Paris for a short time, until fate drew them apart. She did not show up for their rendezvous with destiny at the promised time, and Rick had to leave Paris without her. Now, years later, they are brought back together. Only this time, Ilsa has a husband. We are to learn that she always had a husband, only, during their time together in Paris, she believed him to be dead and told Rick as much. It was the discovery that he was still alive that thwarted their rendezvous. Now, although happy to see her, Rick is secretly heartbroken to discover this truth. One famous scene in the movie is when Ilsa asks the piano player, Sam, to “Play it for me, Sam. Play As Time Goes By.” This has been misconstrued into “Play it again, Sam”,which is actually never said in this film. It is parodied in many others, however.

As Sam plays the song that was Rick and Ilsa’s, Rick enters, hears it, and confronts Sam, asking him why he is playing it, he knows he isn’t supposed to play that song. Then his eyes find Ilsa, and the look on his face is one of joy and pain mingled. Bogie has a face that can do anything, and this is as soul-baring of an expression as a person can have. There is only one other scene which rivals this emotion in his face; when he speaks with Sam later, he expresses his sorrow and anger and frustration over the loss of Ilsa. His face then is that of a ghost, beaten, empty, haunted by lost love and the fact that his love still endures for her, regardless of time and distance and current circumstances.

Rick makes it clear in the beginning of the film that he “sticks his neck out for nobody”. However we are to find that there may be just one person in the world he will stick his neck out for, and that out of love. While he tells Ilsa that it isn’t his concern what happens to Laszlo, he allows her to make a pact with him – if she stays with Rick, he will give Laszlo the transit papers so that he can safely get away from the authorities, who are only after him. She tells Rick that she loves him, but she loves Laszlo as well and just wants him to be safe. Rick agrees, and the plan is in motion. A plane is set to take off and Laszlo is to be on that plane. Rick tells Ilsa it would be best not to let Laszlo know she isn’t leaving with him until the very last minute, and she reluctantly agrees.

At the worst possible moment, Captain Louis Renault is put into a position where he must make it look as if he is coming down hard on the gambling and other verboten activities at Rick’s Cafe. He takes into his possession the transit papers, and Rick has to take action, even against this man who is usually his friend. Wartime’s a peach, eh? So, at gunpoint, Louis hands over the papers and escorts Rick, Ilsa, and Laszlo to the air field to meet the plane. Louis makes out the forms and clears Laszlo to leave. It is then revealed that Rick does not mean for Ilsa to stay in Casablanca, where he feels a sure death is awaiting her. She protests but is shut down by Rick’s calm directive – she belongs with Laszlo and he wants her safe; she must go. Tearfully Ilsa boards the plane. As it takes off, Rick and Louis have a slight issue with some of the upper authorities – those same that put the pressure on Louis in the first place – and Louis comes to the aid of his friend. This is where we leave them, walking into a damp fog, the woman he loves in the air to safety, as Rick gives one last famous line: “Louis, I think this is the beginning of a beautiful friendship.”

True love rules all, that is the message of this film. But sometimes the only way you can love someone is by letting them go, and loving them from a safe distance. This one time, Rick put his neck out for the woman he loved, and it was right.