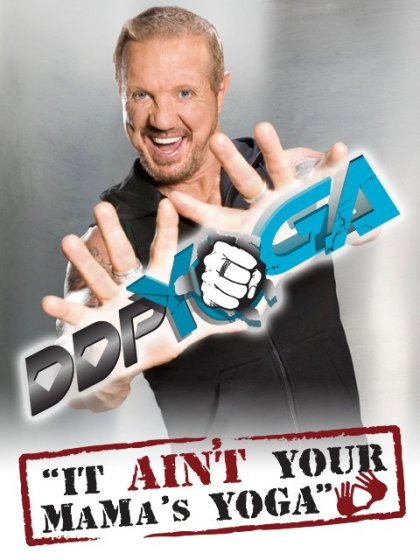 I got off work a little after 2:30 am I believe and didn’t get to bed until slightly after 4am Saturday morning.  My lovely lady E woke me for breakfast at what seemed like 8am and I was soon off to be at my sister’s house at 10am to teach several of the women in my family DDP Yoga.  I arrived slightly late to see everyone there and ready.  I played a few tracks off the new Wu-Tang Clan’s A Better Tomorrow while everyone got situated and to let my mother and sisters hear a few things in particular.  Ironically enough this and a couple texts to my mother on Tuesday led her to say “Yeah, I’d really like to listen to their music.”  What?!  I replied “I never expected to see that!”  and I don’t believe I have figured it out yet either.

I spent the next two hours teaching everyone while DDP instructed on the television between the pauses.  I introduced everyone with the DDP Yoga Wake Up, then I walked them all through the 12 core positions and finished the session up having them do the Red Hot Core.  My two oldest participants did what they could when they were able to.  I did my best to provide positive commentary the entire time to keep their spirits up as I didn’t want any negative waves polluting the room.  It worked and motivated them to keep participating even after giving up multiple times.  I find our mental attitudes and physical attributes are crucially linked to our success.  Well, of course they are.

After finishing the DDP Yoga with my family, I headed home and got dressed for my first day at pro wrestling training.  Located 36 minutes away, I arrived entering a building connected to a shop.  Walked into a small room with a bathroom on the right side and a hallway leading from the left.  I walked down the hallway passing an office on the left and a dressing room after it.  At the end of the hall was a black curtain I opened walking through coming across the first human being and I immediately offered my hand saying “Hi, I’m Roger.”  He shook my hand, told me his name but ended it with “but you don’t want me.  You want him.” as he gestured to a long hair man behind a concession area.  I thanked him and introduced myself to the man behind the counter.  He was the head trainer and told me the fee, I paid and then he gestured to others sitting down.  I went around introducing myself to everyone and took a spot on one of the bleachers near the concession stand.

I waited awhile and then training started.  We were given an introduction talk and then stepped into the ring and learned from there.  From the start to finish it felt like I was on a speeding bullet peeling myself off a wall at the end.  It was over very quickly yet I was blown up and beat.  I slowly gathered myself while in disbelief at what I just survived.  I went to shake the head trainer’s hand again and told him “Thank you.”  He told me not to let running the ropes and the chops to keep me from coming back.  I was too stunned to be shy and said something else to him and ended up I was able to stay during the show and run the wrestlers entrance music with success.  I was witness to an experience I’ve only dreamed of.  I was in awe as my body ached in the background.  It was like being pulled out of the matrix and subjected to an ice cold bath before being slammed around in a barrel dumped out in the back stage area of vaudevillians during show time.  It was a very surreal and unique experience for me.  The idea “greatest moment of my life” did flash through my head a couple times afterwards and I even thought I believe I just found something really special.

Tomorrow I head back for the second day of training which they all seemed to question if I would be coming back or not.  I could imagine why as my body absorbed a lot of punishment.  Luckily my lovely lady E is a nurse and provided advice and some unnexessary(sic) commentary.  She was shocked to see my condition but exclaimed at the site of my bruise on my back “Now we can compare bruises!”  and then referred to me as a pansy for being so delicate.  It did feel like I had been a few rounds with Joe Frazier.  I at least felt I was learning and absorbing a lot of experience in my body.  The most interesting part of course was all the different personalities that symbiotically co-existed.  I’m still in disbelief at just how professional and smooth the entire show went.  I only witnessed it from the back on a large screen monitor, though it was a highlight in my life up to this point at least, seeing the level of respect and comradery was highly honourable.  I went in search of pro wrestling training and left humbled yet a bit impressed with myself for surviving.

Two days later I would receive a phone call from my aunt telling me she always has a “whoosing” sound in her head when she lays down and after the DDP Yoga it was gone.  I told her “Great! Let’s keep doing it then.”  She was in horror when I described my condition and experience from Saturday’s training.  She’s watched her share of local pro wrestling shows growing up during the days of Dick the Bruiser running the Midwest land until today as a local business owner that she knows operates a dance barn locally which books the occasional pro wrestling card.  I told her I was just thankful for having been consistent with my DDP Yoga as I wouldn’t have survived without it.