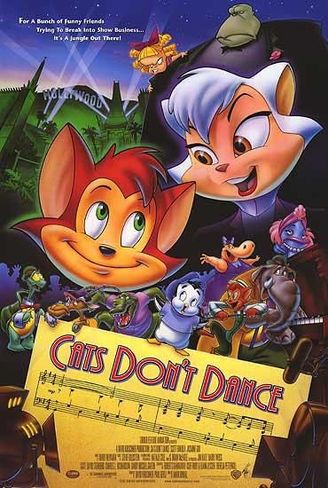 Released by Time Warner’s short-lived animation department Turner Feature Animation, Cats Don’t Dance is a charming tale with a lot of old Hollywood thrown into the mix.  Directed by Mark Dindal, who would go on to direct and co-write the stories to The Emperor’s New Groove and Chicken Little, the tale manages to create a film for lovers of a time that once was, but is still very much loved.  Composer Randy Newman (Toy Story) writes the music and lyrics to many of the songs throughout this very musical film.  As an uncredited choreographic consultant, the legendary Gene Kelly contributes to his last film project, which is dedicated to him at the end.

The story, set in 1939, centers around a young optimistic feline named Danny from Kokomo, IN who packs his bags and heads to Hollywood with a dream to become a star.  Almost immediately he lands himself a one-line bit part in a star vehicle for the pretentious child star Darla Dimple, who hates animals along with anyone trying to steal any of her spotlight.  Unwisely, Danny decides to make more of his one liner “meow” by improvising a song and dance routine around it.  As he performs, he angers the star Darla Dimple, causing her to have an outburst and send her butler-assistant Max (clearly a parody of Max von Mayerling from Sunset Blvd.) to bully Danny off the set.

Danny learns that Hollywood isn’t looking for animal stars but  rahter, human stars, as all the animal actors are relegated to undignified roles.  The confused and heartbroken Danny finds inspiration in a group of animal performers he has befriended.  The inspiration is to create a show utilizing all of their abilities, to prove to the humans they deserve as much respect as anyone.  The piano playing Woolie the mammoth (voiced by George Kennedy),  T.W, the nervous and superstitious turtle (voiced by the legendary Don Knotts), and the dancing duo Cranston the Goat (voiced by Hal Holbrook) and Frances the Albacore (voiced by Betty Lou Gerson (famous as the voice of Cruella De Vil in 101 Dalmatians 1961)) are just some of Danny’s talented and colorful friends he performs alongside.  All the while Danny romances Sawyer, a beautiful but pessimistic feline secretary, who at one point grabs an umbrella and goes “Singin in the Rain.”  Danny also becomes a role model to Peabo “Pudge” Pudgemyer, a cute little penguin that delivers blocks of ice as a side job.

Highlights:   Darla Dimple’s name seems to be a mix of famous child stars Darla Hood (Little Rascals/Our Gang fame) and Shirley Temple.  Louis B. Mayer _ the head of Metro-Goldwyn-Mayer (MGM) – is parodied as L. B. Mammoth, head of Mammoth Studios.  When asked the secret to his success Mammoth replies “Simple, it’s Dimple!”  There’s the appearance of Hollywood’s famous Brown Derby restaurant with cameos of Mae West, Stan Laurel and Oliver Hardy.  Other cameos consist of Cary Grant, Clark Gable, Bette Davis, Joan Crawford, and W.C. Fields, as well as King Kong – referred to as simply Kong – who speaks in a high nasally voice as he walks by carrying the Empire State Building under one arm and a biplane with the other.  At the end of the film many films are parodied with the animal actors filling in, such as T.W. as the lead in Teenage Mutant Ninja Turtles and Beetlejuice, as well as Cranston in Casablanca and Mask.

I give it 3 out of 5 for a rating of Really Good.  Perfect for the family and lovers of old Hollywood.