A twisted, haunting ghost story escapes out of The Skeleton Key, directed with subtle brilliance by Iain Softley (also responsible for a guilty pleasure of mine Hackers (1995)). Written by Ehren Kruger who wrote the screenplay for both The Ring (2002), The Ring 2 (2005) and contributing the majority of the writing on the sequels to the Transformers franchise. He was also responsible for Scream 3(2000), Reindeer Games (2000) and The Brothers Grimm (2005).

We’re introduced to a nurse, Caroline Ellis, played by Kate Hudson, who has decided to quit her job at a nursing home after a patient dies. She tells her friend the nursing home couldn’t wait to get rid of the dead patient and treated it too much like a business. Her friend replies, telling Caroline “It is a business, at least he had you.” In which she replies back, “No, it’s suppose to be a business about caring, they couldn’t care less”. Instead Caroline gets a job from an ad in the paper for an in-home hospice nurse at an old plantation. Her friend warns her it’s in the swamps, which contain gators. She counters that she will get the hours she needs in school, get paid AND get to do things her way.

So off Caroline goes in her old Volkswagon bug through New Orleans with its awe-inspiring, beautifully twisted trees, swampy locales, and creepy Texas-Chainsaw-Massacre-like roadside stores. She arrives at the mansion of a home, meeting the family’s lawyer, played by Peter Sarsgaard. He delivers his attempt at a southern accent, only not consistently enough perhaps for me, even though Sarsgaard is one of my favorite actors. The home’s residents are an elderly couple, of course – an old man named Ben Devereaux who has suffered a stroke (silently performed throughout flawlessly by veteran English actor John Hurt) and his wife Violet (played by Gena Rowlands, who will forever be remembered for making everyone cry their hearts out with her role in The Notebook (2004) as the Older Allie Calhoun), gives a performance quite the opposite leaving me as creeped out as though she were Kathy Bates in Misery (1990).

Plagued with superstition, the history of the home is revealed to us in a suspenseful, terrifying flashback of two house servants in the 1920’s being lynched and set ablaze! At the core of this story is the belief in Hoodoo, an old folk magic with roots in African and Native American traditions. The origins are thought to have developed from African slaves in the American south.

Caroline becomes intrigued, delving into the world of Hoodoo, discovering for herself it might not be superstition after all. She is warned a person only need believe in Hoodoo for it to be real, for reasons perhaps intentional. Caroline eventually becomes convinced by Ben’s actions that his wife is responsible for his condition. In an attempt to get help, Caroline ends up fleeing into the swamp in a boat at night during a tremendous downpour.

The film becomes darker, with an atmosphere that crawls over you, sinking in, paralyzing you with a horror that carries the story into a twisted ending from which you cannot escape.  The ending left me speechless the first time and horrified me for different reasons with a second viewing. 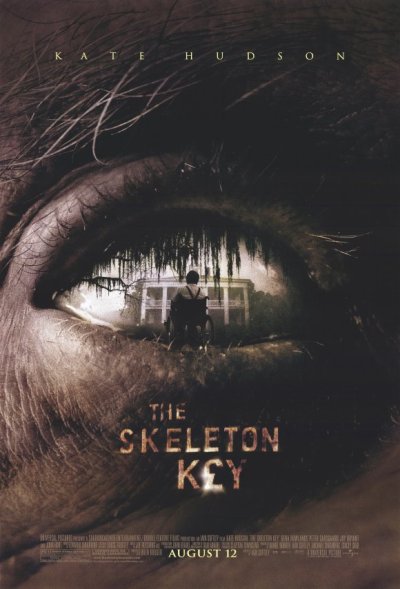 Best Death: In the flashback we are witness to one of life’s real-life horrors when mobs of rich white folk would lynch and set ablaze African-Americans, without worries of an investigation nor repercussions at all. Two children are seen watching from within the home as the reflection of the flames dance in the window at what surely would have traumatized for life any witness to such an horrendous atrocity.

Best Scene: In a fight for her life Caroline shoves Violet backwards over the railing causing her to viciously fall all the way down the stairs. Caroline rushes to the attic to protect herself with an attempt to conjure up some kind of Hoodoo spell of protection. The attic door is thrown open by Violet, slamming into the wall. She looks at Caroline saying “Child, I believe you broke my legs”, then starts dragging herself across the floor toward her. The situation escalates to a mirror-shattering climax and a revelation as twisted as the bow of any true skeleton key.