A tale about the haunted house across the street comes ALIVE in Monster House. Executive Producers Robert Zemeckis and Steven Spielberg present the second animated film utilizing extensive motion-capture technology not seen since Zemeckis brought us The Polar Express (2004), which best demonstrated the style. Based on a story by Dan Harmon and Rob Schrab, who teamed up with Pamela Pettler on the screenplay. Pettler handled screenplay responsibilites on Shane Acker’s incredibly interesting 9 (2009) and Tim Burton’s Corpse Bride (2005).

The story starts with DJ, voiced by Disney Channel’s Mitchel Musso, spying on the neighbor across the street – the Steve-Buscemi-voiced Nebbercracker. Nebbercracker, an evil old man, who seems to have a knack for confiscating all the neighborhood children toys that end up in his yard, has DJ very suspicious. DJ’s oblivious parents (who of course don’t believe him), are leaving town, having arranged for DJ to be watched by their babysitter Elizabeth, voiced by Maggie Gyllenhaal.

The tension tightens once DJ’s best buddy – the hilarious and notoriously written Chowder – comes over and his basketball ends up rolling into Nebbercracker’s lawn. DJ attempts to get the ball back, only to have Nebbercracker come out hollering “DO YOU WANT TO BE A DEAD PERSON?!” DJ, frozen in fear, has his arm grabbed by Nebbercracker, who won’t let go. But after such a stressful time of things Nebbercracker collapses onto the ground, ending up hauled off in an ambulance. The mood quickly becomes more serious as the sun goes down on Halloween eve and the suspicions rise as Nebbercracker’s house starts to take on a life of its own.

Elizabeth shows up in a pink blouse with an E emblazoned on the front left side, reminiscent of the “L” Penny Marshall’s character wore on Lavern & Shirley. Once DJ informs Elizabeth his parents have already left, she removes her pink blouse revealing a sleeveless black shirt with “SKULL+BONES” across the front. She also removes her now unfitting pink head band, shaking her nicely-put-back hair into a hip layered style very similar to one Maggie Gyllenhaal, informing DJ the names “Zee”. She treats us to the sounds of Skull+Bones when she pops a cassette tape into the home’s player labeled “SKuLL+BONE’Ss LiVE AT THE SMELL”. What once seemed like a normal teenage girl ends up being quite questionable as a babysitter. Especially when her Jason-Lee-voiced boyfriend Bones, a typical metal head who enjoys bullying DJ, shows up.

Bones tells a haunting story of Nebbercracker taking his kite when he was young. He tells Zee he remembered seeing Nebbercracker kissing and talking to his house. Zee doesn’t take him serious but Bones replies everybody knows what he did to his wife. When Zee asks what it was he did, Bones comically shouts “HE ATE HER!” DJ overhears all of this and starts to become paranoid that Nebbercracker is haunting him after some very strange occurrences.

The ambiguous time-setting has multiple arcade machines utilizing graphics that look 8 bit at best inside a “GAMEZONE” at the local Pizza Parlor. This is where we are introduced to the smartest guy DJ and Chowder know – Reginald Skulinski, or Skull to the boys. Skull, voiced by Jon Heder (once famous from his role as Napolean Dynamite), we are told by DJ and Chowder, is the “3 time Tri-State over-14 ‘Thou Art Dead’ Champion” and that “He once played for 4 days straight, on one quarter, a gallon of chocolate milk and an adult diaper.” and they include “The man’s a legend.” The kind of video arcade dedication found in the documentaries Chasing Ghosts: Beyond the Arcade (2007) and The King of Kong: A Fistful of Quarters (2007).

Animated wonderfully with an autumn setting of orange and red leaves blowing around and across sidewalks in the fall wind, excellent motion-captured performance by the entire cast and a Monster House plot that pays homage to Stephen King’s epic Dark Towers series, even having a character shine a light on a toy monkey very reminiscent of the short story “The Monkey” in King’s Skeleton Crew. The voice work performances compliment the quality of the animation technology like never before, while still managing to be less creepy than Tom Hanks’ Polar Express incarnations.

A phenomenal, haunting, hilarious tale for when Halloween is in the air – from heartwarming moments of true love and friendship, to the lonely aching sadness felt within from being an outcast of society, to a climactic ending so over-the-top fantastic it’s only suitable for an animated film equally as grand. Monster House is a family’s best friend for a horror film with laughs throughout, all the way to the must-see Jack-O-Lantern-extinguishing dog. 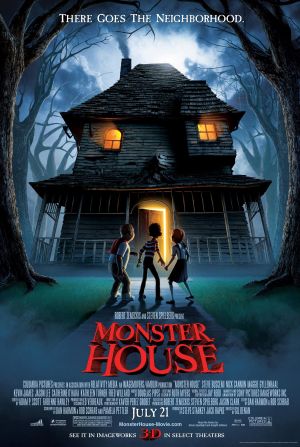 Best Death: The best death comes in a haunting tale of society’s effect on an outcast named Constance. Once a circus attraction advertised as being as big as a house, she is tormented by the neighborhood children. She is at home when she loses her temper at some children, making her become disoriented with rage and causing her to fall to her death.

Best Scene: In an attempt to find the heart of the house, after learning from Skull about “domus mactabilis” (Latin for “deadly home”- where a human soul merges with a structure creating a possessed monster), the kids attempt to drug the house with cough medicine, hoping to put it to sleep. Once inside we discover the house’s uvula, to which Chowder declares ignorantly “Oh, so it’s a girl house.” Chowder’s childish innocence will have you laughing constantly, while adding to the tension for the other characters onscreen. All these pieces come together to make one MONSTER of an ending!